'Balkan Lynx' Project
'A glass of water for all my splinters' 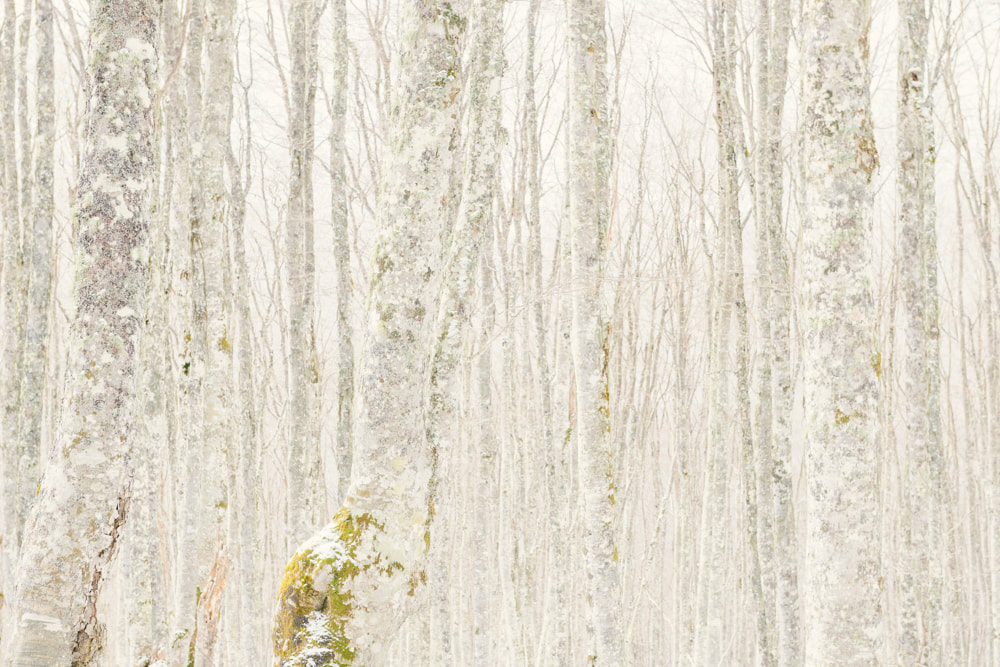 When one thinks of large, endangered cats, their mind most likely travels to the depths of Africa or as far as the jungles of Asia. When asked to contemplate the daily life of a conservation scientist, the image of heavy wooden structures being carried by hand, over snow-cover mountains is not the first that is painted. Yet, the particularity of an imperilled cat in the heart of south-east Europe and of a skilled team devoted to its protection, is what prompted me to travel to the Republic of North Macedonia in the early spring of 2017 and join the MES (Macedonian Ecological Society) Balkan Lynx Recovery Program’s fieldwork.

​With a mere 30 or so individuals left roaming the south-west Balkan Mountains, the Balkan Lynx is one of the most threatened cats in the world. Although I was taken by the ray of hope to see this elusive animal, catching the sight of it was not central to my narrative. Through this journey I attempted to tell the story of the people who dedicate their lives to see this great cat take over these mountains again.
Learn more about the Balkan Lynx Recovery Programme. Click here → ​ 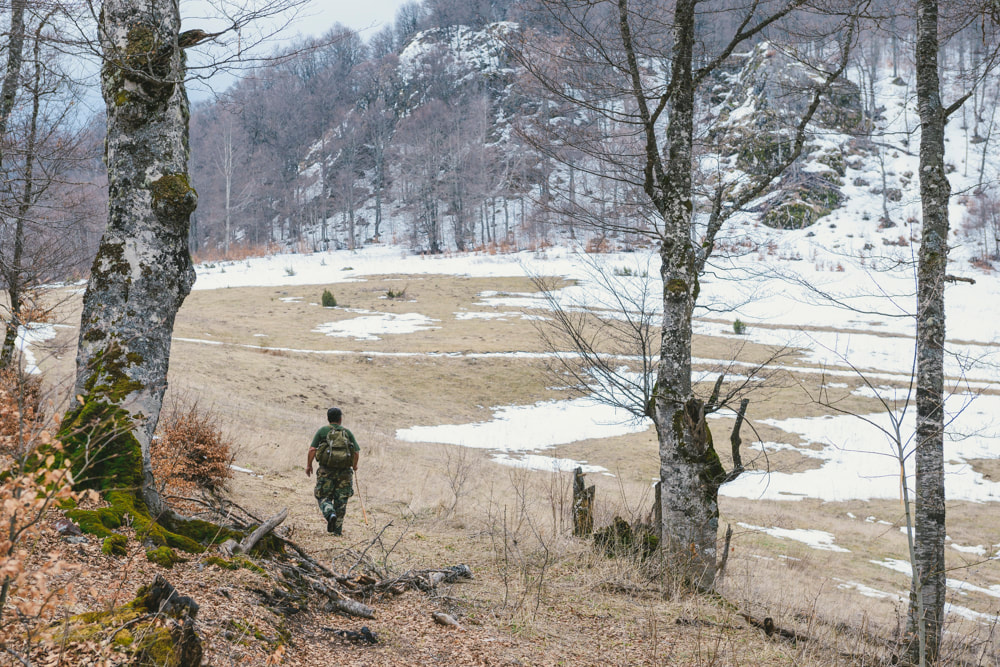 A skilled tracker and survival expert, Panajot leading the team through snow covered Stogovo mountain.
After arriving in Skopje, I travelled to Kichevo, where the MES field house is located, serving as the base from where the team embarks on all their fieldwork activities for the season.  As much as I tried prior to my visit, to imagine what this job entails, as early as the first morning, I was bewildered by the amplitude of competences that are employed to carry it out.
​
Driving for hours was followed by hikes through the forest to get to the precious camera and box traps for checks and maintenance. The purpose was to search for a glimpse of cat movement on the camera and to undertake the processes needed to make sure that all is in place for the next time it passes by. To ensure identification of each individual captured on camera, the devices are carefully placed perpendicular to the cats' routes aiming at providing a clear look into their furs' distinctive patterns. Then came the box traps' turn. 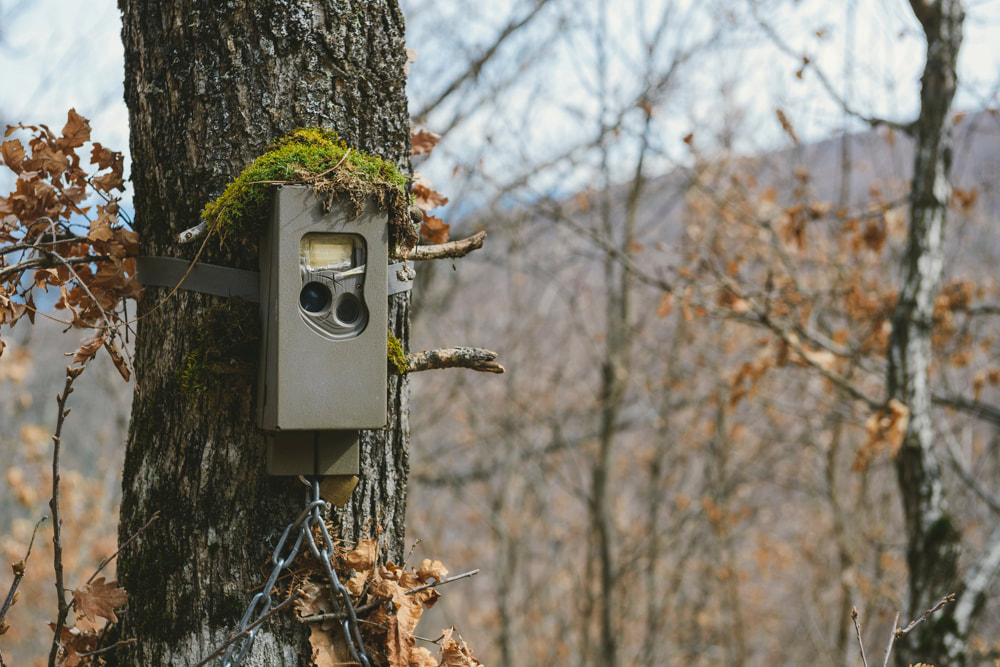 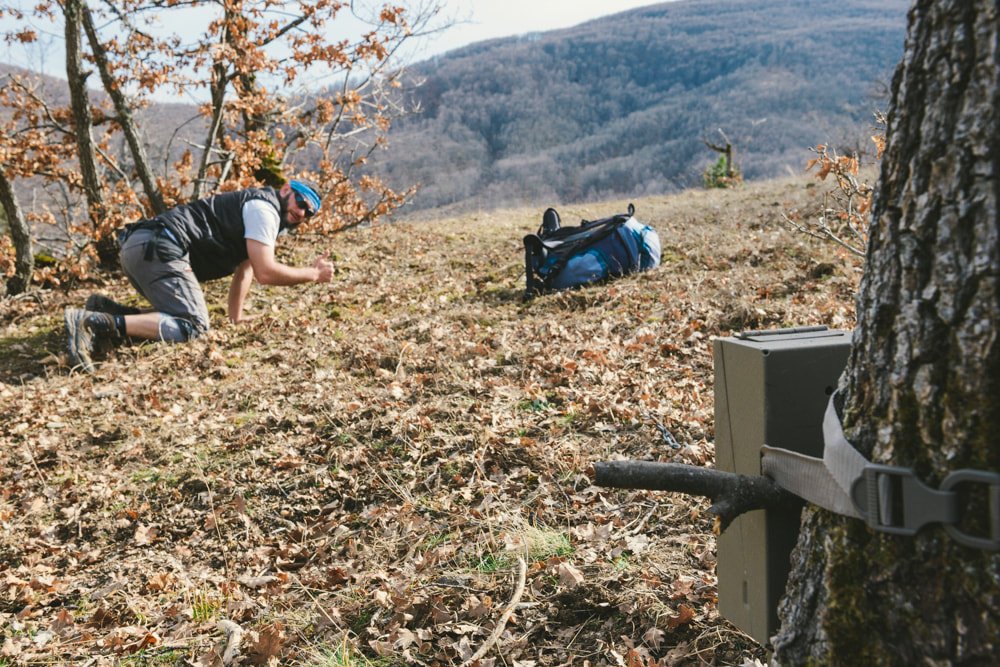 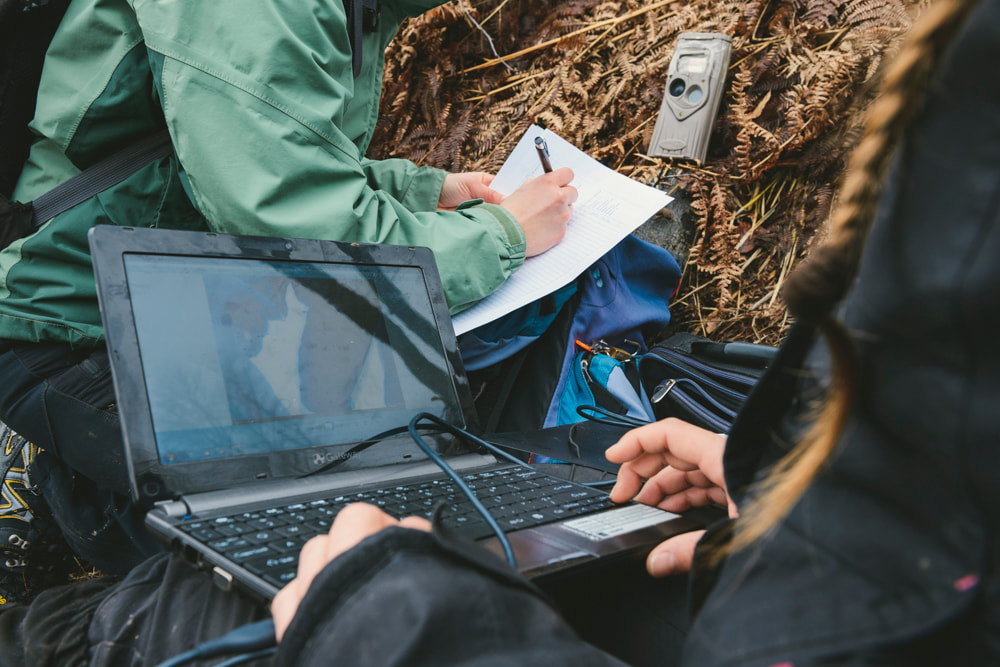 These large, yellow, wooden structures, serve the purpose of catching the Balkan Lynx in order for the scientists to take closer looks, possibly identify the individual and tag it with a GPS radio collar and carry out all necessary scientific work. Being out and exposed, box traps are not invulnerable to the elements. From wind, to rain, these traps, are in need of constant care, and call for the scientists to often take the role of carpenters. At the end of a long day, in which a box trap was hoisted on foot up a mountain, and after completing the back-breaking work of its placement, upon returning to the MES field house, Gjorgje, a member of the Balkan Lynx Programme pointed out that every day he is gnawed by splinters on his fingers. His grievance not only accentuated the peculiarity of the image of this nuisance - usually associated with manual labour - being part of a scientist’s daily life, but it also embodied the obstacles that are found on the road to saving this species.
I quickly realised that not only is the placement of the box trap a science in itself, and a product of heavy physical work, but it is also the result of a collective effort. Situating it involves shaping a cat’s potential route, laying piles of branches on its edges to direct it through the trap, the floor of which is covered in leaves and hay bearing the scent of another Lynx's urine, and placing camera traps on both of its entrances. On the ground however, this science becomes an extension of local knowledge, as discussions with locals about latest Lynx sightings or possible routes that the cat takes, usually precede the traps' placement.

“One glass of water is all you need to gain a friend” Panajot, a local and one of the most prominent members of the Balkan Lynx monitoring network, told me at the end of a long day in the field. In the literal sense in which it was meant, accepting an invitation, sitting on the same table and offering someone your time, can yield useful information and, most importantly, alliances in this difficult task. At the same time, water, as a vital substance for life, can be perceived to represent the vitality of collaboration in conservation efforts.
​
​What struck me, was that oftentimes this glass of water was shared with people whose concerns did not necessarily converge with those linked with the survival of this species; or they were even conflicting it. Being however part of local knowledge, and of the area’s fabric, people from these communities were given the time and attention that could potentially not only lead to finding out information about the Lynx, but also about activities adverse to its conservation, such as illegal logging, in a way that could be used in the future to deal with such issues.
​​Deforestation is one of the main threats to the area’s wildlife; one that is swiftly noticed as one arrives on the south-west Balkan Mountains. Logging activities carried out on horseback, owing to the inaccessibility of these mountains, leave the sight of wounded trees of which only fragments can be transported down. As evident as the thinning of the forest, is the despair outlined on the faces of those working hard for the cat’s protection. Joining the 2017 spring fieldwork and listening to their stories, the conservationists’ disappointment far surpasses that caused by employing a whole team to drive for hours and hike up to a remote location following the trigger of a box trap, only to find that it was activated by a passing owl. The agony of the confused owl may vanish after its release; but for the Balkan Lynx team, the let-down brought about by years of efforts on a road filled with elements that hinder their fruition, such as the seizing of a box-trap which took place during my short stay, lingers on and makes one wonder of their persistence to carry on. 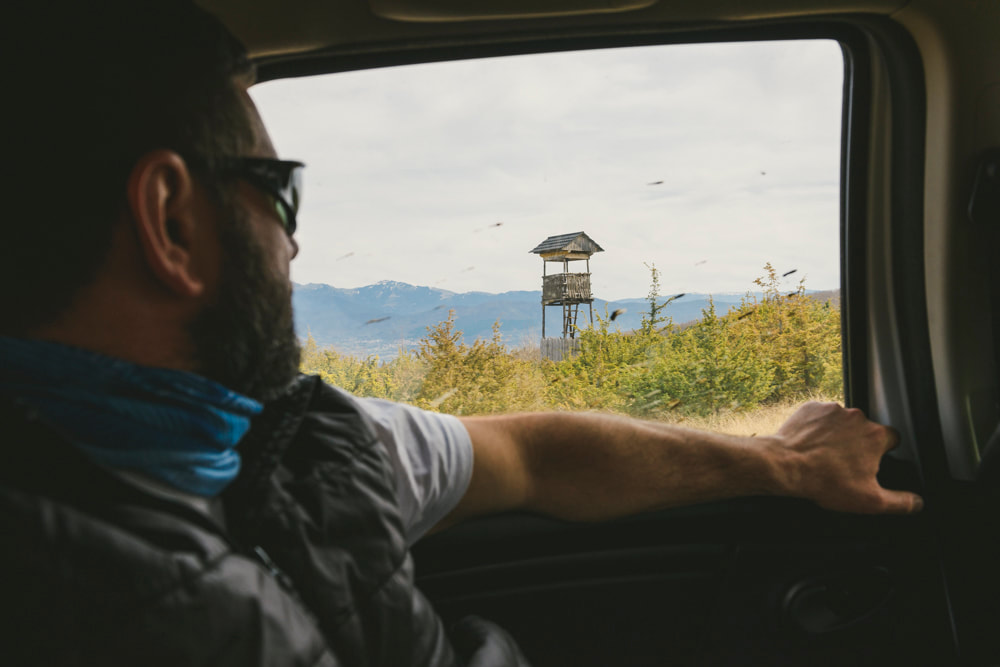 A hunters' hide towering over what was a forested area before being heavily logged. 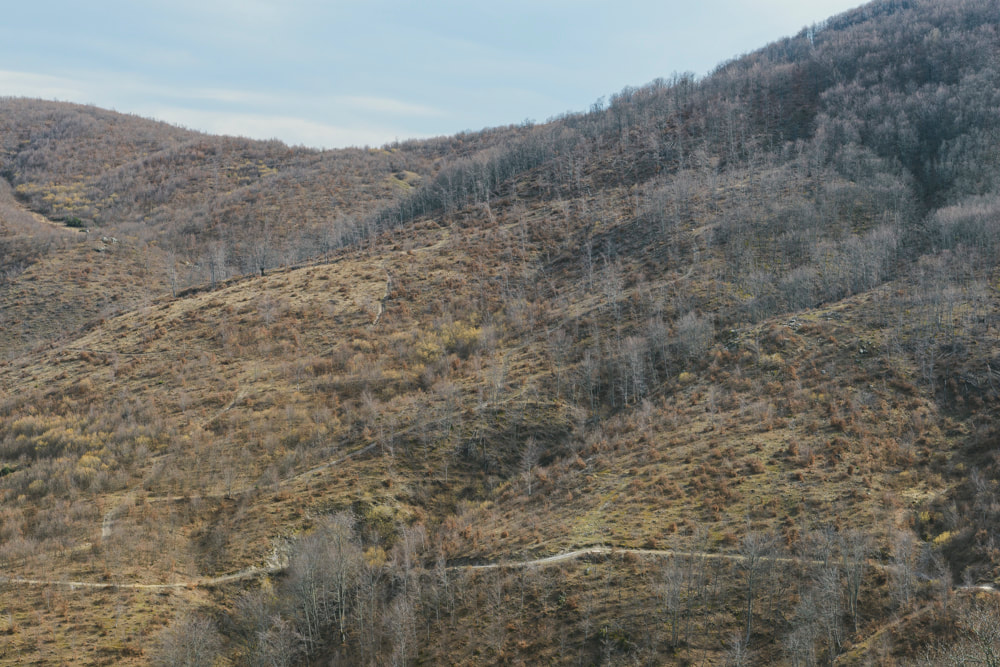 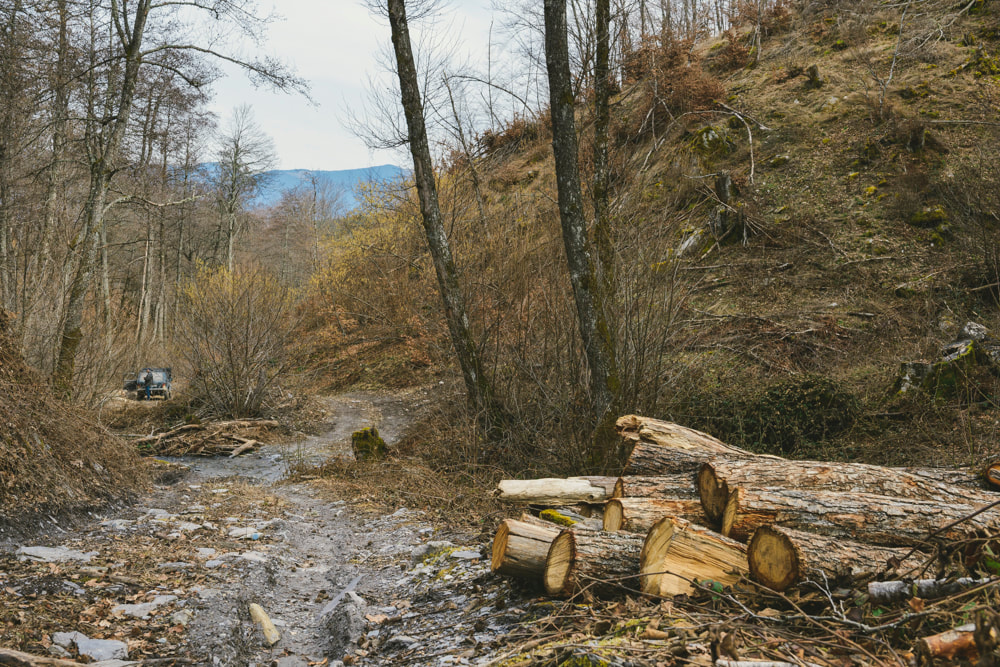 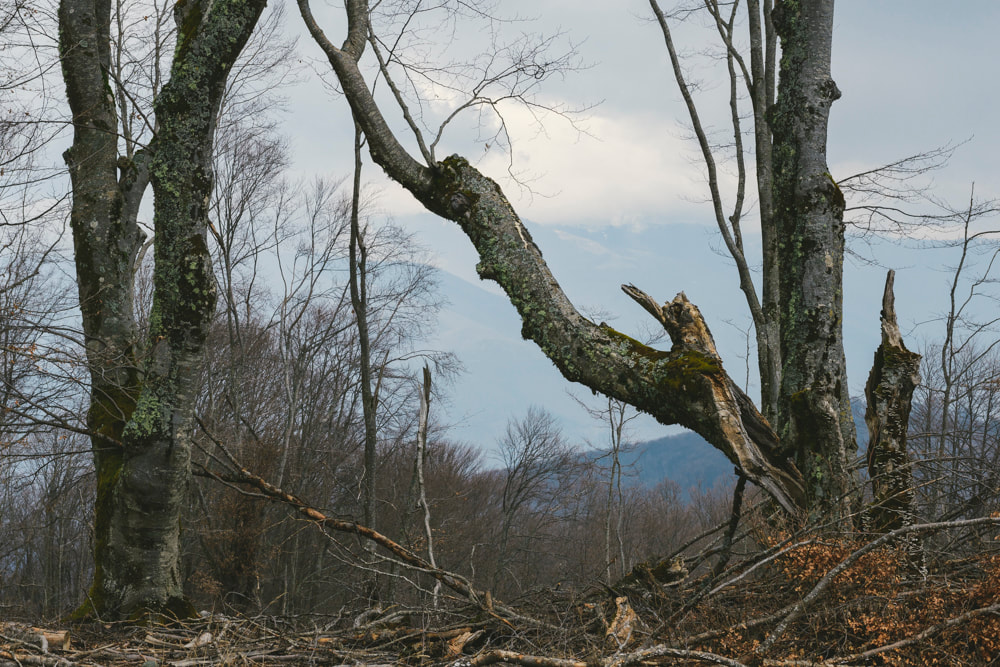 ​I was not lucky enough to have been present when one of these box traps fulfilled its feline purpose and yielded a shiver of excitement. Witnessing however this team at work and getting to know their stories, was spectacle enough for this initial visit. From handling scientific data and the preparation of reports, to the social upkeep involved, the long drives, upward hikes, skilled carpentry, employment of tracking skills, and handling disappointment with a chin up, further sparked my initial interest to share this story in ways I couldn’t imagine before getting to the Balkans. 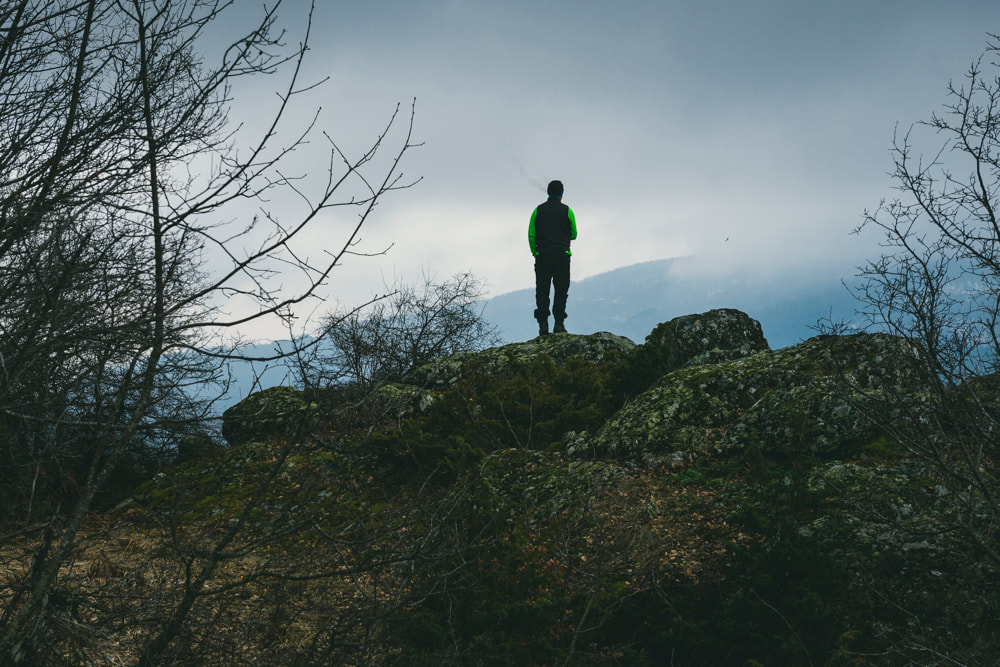 An eagle soaring in the distance, over the lands that this tireless team is fighting hard to protect.
Projects